“These violent delights have violent ends

And in their triumph die, like fire and powder,

Which, as they kiss, consume.”

Last week, I finished watching the amazing  TV series Westworld. As a Sci-Fi fan, I kindly tired of the repeated laser  gun and space ships,  this TV series is really an open-minded setup with a solid storyline of Artificial Intelligence (Hosts) and Human (Makers/Vistors).

Imagine that technology was so advanced, you could step into a wholly immersive virtual reality world that was very nearly as real as our own. A theme park, where you can live out your fantasies. No awkward headsets or VR to wear. No fuzzy graphics, keyboard, and mice. Because it’s all real—for the most part.

You can buy drinks at the local saloon, or pay for sex with one of the AI prostitutes at the bar. You can get in gun fights with outlaws, or save the town from murderous highwaymen. Or, if you really want to, you can go to a farm house, kill the elderly parents there and rape their daughter. This is where the stories are written, tinkered with, and the microcosm of Westworld manipulated for the entertainment of its guests.

It’s the ultimate escapism, tailored to every kind of fantasy, no matter how depraved. It’s video games and pornography and virtual reality and escapist fantasy all rolled up into one, and in Westworld, HBO’s new science-fiction Western, it’s a reality for “rich assholes” who want to indulge their basest hunger.

Storyline:  Westworld isn’t your typical amusement park. Intended for rich vacationers, the futuristic park — which is looked after by robotic “hosts” — allows its visitors to live out their fantasies through artificial consciousness. No matter how illicit the fantasy may be, there are no consequences for the park’s guests, allowing for any wish to be indulged.

Westworld, opens to a beautiful woman, sitting naked on a chair. A fly crawls over her face as a man asks her questions. We don’t see her speaking or the man, but we hear them talk. He asks her whether she questions the nature of her reality; she says she doesn’t. When the series premiere ends, and we know what’s happening a little bit better, the same scene unfolds, only slightly changed. A new interrogator. A glitch in the system. Before, she couldn’t hurt a fly. Now, when Dolores steps back in her world, her dissident father replaced with a new host, she stares off into the distance with a slightly different look upon her face. A fly lands on her neck, and she slaps it dead.

To talk about the technology, at first I thought virtual reality (VR) would be simpler and cheaper, and one assumes just as easy in such a high-tech society. But it seems this is not the case. This is a real flesh-and-blood, tangible physical space. Hosts are programmed not to do harm, and apparently, weapons are programmed not to shoot at living things. But there is still risk here. 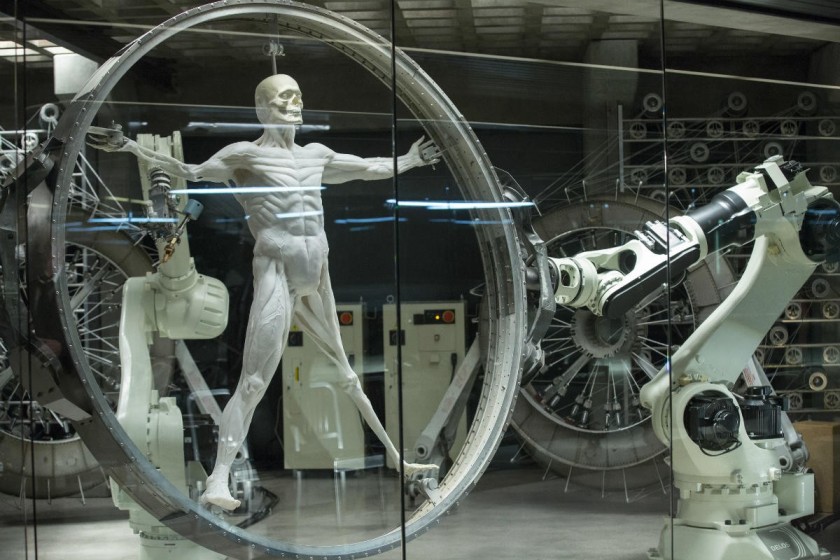 3D-printed people serve as hosts for the Westworld theme park.

The hosts themselves are 3D-printed AI who have gradually, over the years, become more and more human, both in terms of engineering and software. This is a much more advanced society than our own. Technology is far beyond what we’re capable of. The disease is a thing of the past. Perhaps death, too, given a little more time.

The hosts are nearly as real as we are, physically at least. If you prick them, they bleed. But they’re not supposed to think for themselves. They’re programmed to play out on a loop, follow a narrative with only minor improvisation, and never hurt a living thing, which is why we see flies crawl across their faces and the hosts do nothing about it. Then all that starts to change. The series premiere opens with a day like any other, but bit by bit things start to go wrong. Something is breaking or evolving, within the hosts themselves.

Teddy and Dolores are our star-crossed lovers.

The story operates on so many levels, it’s at once a bit overwhelming to take in and utterly intriguing. We’re made aware of a deeper mystery behind the company’s intention with the theme park, a bigger picture only barely hinted at. The story as it unfolds in the real world promises to be every bit as fascinating and mysterious as the story playing out in Westworld.

I’m not entirely sure how it all works just yet, and I’m not sure we’ll necessarily find out all the details. To be honest, at first, I assumed the theme park was, in fact, a virtual world, a Matrix of sorts, and that both hosts and guests were somehow projected into that world. In a lot of ways, that would make more sense. A lot of killing goes on, after all, which means a lot of repairs or new bodies for hosts after each story loop.

The last episode when Doctor Ford told Dolores about the “God” with the Michelangelo painting.  That part triggers some thoughts beyond my writing ability. 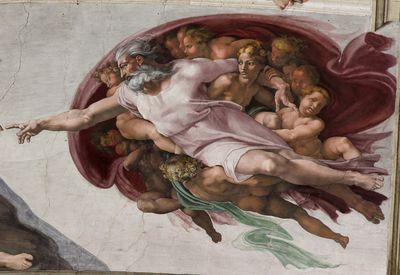 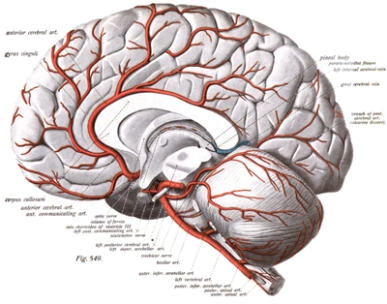 I found the season one of Westworld gripping from start to finish. It ended on the perfect note, though I wish it had gone on much longer. I can’t wait for season two and hope desperately that this show continues to be as good as the first one. I love the mystery and the sense of dread hanging over everything.

At last, be grateful to Nature, for the reason that:

Consciousness is the true gift.